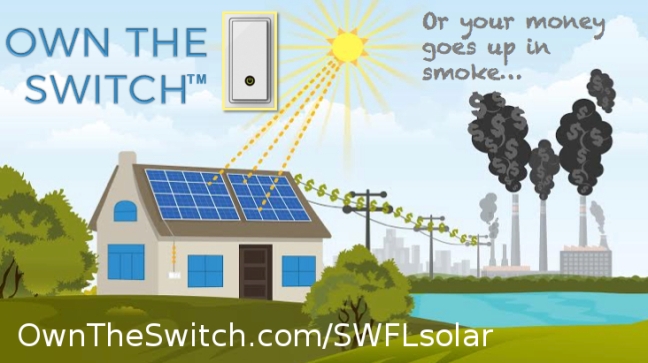 Electricity in America is produced mainly through the burning of coal and natural gas that is then used to heat water that creates stream that turns a turbine to produce electricity. This electricity is then transported miles away over an extensive grid to homes and businesses for daily use.  With solar power, crystals are placed on the roof of a home or business and when sunlight hits them direct current (DC) electricity is created, that is transmitted to an inverter which converts it to alternating current (AC) electricity that powers modern devices throughout the day.

When comparing the impact to the environment of power generation with regard to each source we first must look at head to head quantities of the fuel. In the Fort Myers area the primary fuel for power generation is burning natural gas. For each kilowatt hour (kWh) it takes 10 cubic feet (0.010Mcf) of natural gas. So, when considering a calculated power use of 1200kWh in one month that is 12,000 cf (12 Mcf) of natural gas. This burning gives off 117 lbs of CO2 per 1,000 cf (1 Mcf), which equates to 1,404 lbs per month per household. Impacting us and the environment through lower air quality, decreased health, and climate change as a green house gas.

Florida uses coal for 30% of its electricity generation, pretty much 30% from natural gas also. When coal is used for power generation it takes 1.0 lb to produce 1 kWh of power. Looking at a user of 1200 kWh in one month that is 1200 lbs of coal. The byproduct of burning this coal is 4,631 lbs per ton, so approximately 2,315 lbs of CO2 per month per household. Producing coal ash (filled with mercury) that further degrades air quality and settles in bodies of water (the reason fish has high mercury content). This climate impact is not limited to CO2, there are a myriad of pollutants within burning fossil fuels like CO2 and CH4 (methane), which are simply the most notable greenhouse gases.

Solar energy produces 41 MW of power for the “Sunshine State”, ranking it 17th in the nation. A home that is using 1200 kWh from solar panels has 0 lbs of CO2 emissions. After manufacturing of solar panels the emission stop…there are no more…no other greenhouse gases…no emissions of any sort. So the environmental impact is none. In all fairness there is an impact through the manufacturing, but there is some in mining coal and fracking to acquire natural gas, however, the focus is power generation and its environmental impact.

Comparing the power generation sources solar is the obvious choice based on its lack of negative environmental impact. It also lends itself to use by individual homes and businesses through rooftop installations. Meaning that it is not just a utility company game, every homeowner (with a properly situated home) can play a part. Every commercial building, particularly ones with large flat roofs, can be laden with solar panels to provide sustainable power. In Fort Myers we receive 266 days of sunlight, panels are able to produce power on cloudy days just not as much. In that almost 3/4ths of the year the CO2 and other associated greenhouse gases as well as procurement externalities can be avoided completely. There is even a vote to allow a tax exemption for homes and businesses that go solar ultimately making it easier to go solar. That is amendment 4 and it is recommended to vote YES August 30 on that (NO in November on amendment 1).

Overall, with the increase of solar rooftop installations the environmental impact will reverberate through all facets. Diminished mining for coal opens up extensive tracts of land to greater use. Fracking, as a means to collect natural gas, will no longer pose a threat to water supplies, aquifers, or the land mass as a whole. Spills will be reduced to somber notations in history books. With solar a spill is just a welcomed sunny day. We all need to do our part and find out how to go solar for an environmentally responsible future. To not do so means that your money just goes up in smoke.

This site uses Akismet to reduce spam. Learn how your comment data is processed.

I am a solar energy professional working to provide solar rooftop power to residences and commercial buildings to make Florida truly the Sunshine State. Rooftop solar to me is the best way the an individual home can impact the environment.