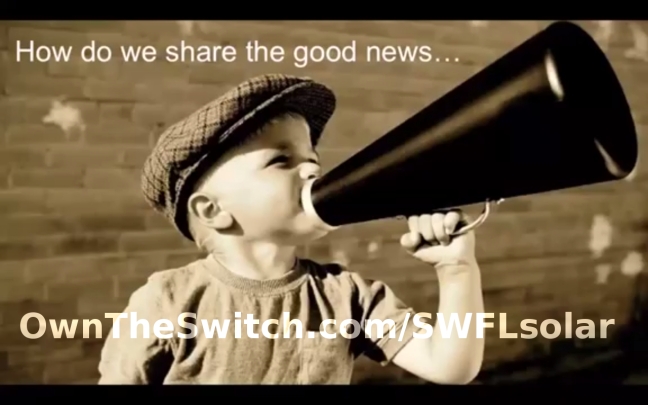 The greatest impact we can have is to be an example to those around us. Living a life that takes responsibility for what every individual can do has a resounding effect on those around us. When each one takes environmental responsibility personally by making meaningful changes we reach one more person that was waiting to act. Taking advantage of the power of the sun is a silent (non-polluting) and effective example that speaks volumes to friends, neighbors, and passers by.

So the question becomes what is holding back the new model of  solar adoption? The president has proposed to bring the country utilities to a more renewable future through making efforts to reach 20% renewable energy production by 2020, which really is sooner than you think and a long awaited move. Presidential candidate Jill Stein has even made it a part of her platform. Presidential candidate Gary Johnson is focused on the people taking control of the environment over government level schemes. The Clinton and Trump camps are both connected to energy special interests and the status quo. The grassroots is where the most effectiveness can be delivered and home solar is still lagging on its adoption, while business has just overcome a major hurdle with the passage of amendment 4. The neighborhood streets of Florida should be lined with glittering rooftop arrays. Come to find out many homeowners are still under the impression that solar is expensive. Despite the fact that since 2010 the cost of solar has dropped 45%. If studies and news articles are not enough to drive home the point that solar has matured and is now comparable or less than utility power, it will take you to get the word out. We must address the motivation to go solar one home at a time. Each one supporter must reach one supporter.

The environmental impact of doing nothing is continued pollution production, ton upon ton of burning coal and million cubic foot upon million cubic foot of natural gas from fracking; month after month. Giving more and more credence to a climate change catastrophic future. Furthermore there is the lost monetary savings year after year next to Florida Power and Light working to increase rates by 24%. A solar home has a flat rate for its term making it predictable and then has its greatest advantage, it reaches the point that the electricity bills cease and the system continues to supply power. Breaking the womb to tomb electric bill. Making it probably the most exhilarating feeling next to knowing that the family is a standing testament to environmental responsibility.

How to move forward and become a solar home is simple and easy, contact a solar professional to do a free solar assessment to determine feasibility. Orientation of a home, shading from trees/buildings, or roof size are factors that can have significant impact on energy production. From there your professional will provide a comprehensive proposal on a system and take advantage of the the 30% tax credit, net-metering, and tax exemptions to make maximize financial benefits. Then from day 1 you can take the lead in reaching the next home and even be rewarded for doing so. Distributed and decentralized power production gives power to the people to reach a sustainable future one roof at a time.

10 thoughts on “Each One Reach One”

This site uses Akismet to reduce spam. Learn how your comment data is processed.

I am a solar energy professional working to provide solar rooftop power to residences and commercial buildings to make Florida truly the Sunshine State. Rooftop solar to me is the best way the an individual home can impact the environment.